I hope you rang in 2013 in a grand way.  We normally sleep in the new year.  Real party animals…I know.  We let our kids do all the celebrating for us.

This year, I didn’t get to sleep in the new year.  Instead I was sitting in a recliner holding my sick baby.  I watched the clock tick its way into the new day while my sweet Charlie lay in my arms burning from fever and breathing heavily. I watched him labor to breathe praying the Lord would open up his airways.  We had been battling this fever for 4 days now, but Charlie only seemed to be getting worse than better.

After a long night of barely any sleep I knew by morning we needed to get Charlie help, so we took him to the ER.

What a grand way to start off a new year than in the ER with your baby…said no mother ever!

So many were praying for him thanks to a quick post on Facebook & a few text messages I sent.  The symphony of prayers with Charlie's name on them were flooding the heart of God and we began to watch him work.

Once we were in an evaluation room we were sent for x-rays to see what was going on.  Thankfully, he had no pneumonia and he tested negative for flu.  But he did have RSV (Respiratory syncytial virus) which in adults & older children is nothing more than a cold, but in babies it becomes more serious.  Charlie tested positive for this so a breathing treatment was done. 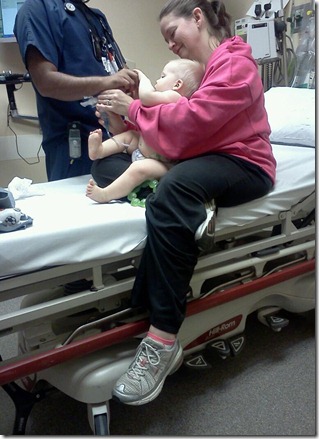 Once that was done he chilled out & went to sleep. 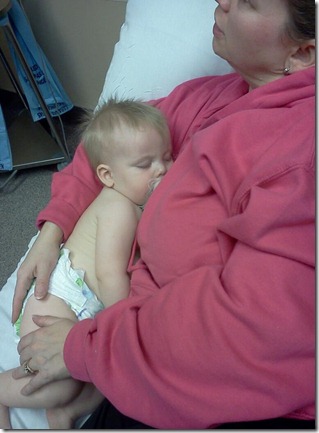 He was so tired from working so hard to breathe that I know it had to be a relief to him to be able to breathe easier.  While he slept, the doctor watched Charlie’s oxygen numbers. After watching a while he made a phone call to Charlie’s pediatrician and they decided Charlie needed to stay overnight for observation.  UGH!!!

In spite of all of this Charlie is smiling.  Even though he didn’t feel good, he smiled at whoever walked in the room. He blessed those tired ER nurses and doctors by his sweet little smile. 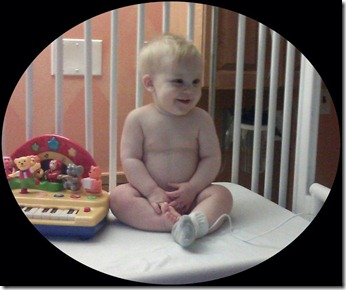 We were sent to a room where we met a whole new group of nurses and were getting ready to stay the night.  Soon, our nurse informed us that the on-call doctor just happens to be a pediatric pulmonary specialist.  Just happens?  I don’t think so.  Here we are with a baby who can’t breathe and the on call doctor specializes in breathing problems like asthma, etc…

So, Dr.Lei comes in and looks Charlie over and to our surprise tells us that Charlie doesn’t need to stay over night.  Yes, he is still sick, but with breathing treatments he will continue to improve whether he is in the hospital or at home.  The clincher was we needed a nebulizer so we can do the treatments and we didn’t have one. And because we were there on a holiday the chances of getting one were really slim.  UGH!!!

But wait!  People are praying!  I knew we would get to go home.

The hours began to tick by and still there was no nebulizer.  Charlie slept more than he had in days thanks to the breathing treatments.  But still, we were being told they were having a hard time getting a nebulizer. Around 5:00 our nurse came in & let us know that she started making phone calls and found someone to bring us one but it would be several hours.  Ok, so a little hope there.  We had waited this long, we could wait a few more hours.

It was time for another breathing treatment and Alfred comes to deliver.  He was the Respiratory Specialist.  He does this all the time.  He knows all about how hard it is to get a nebulizer on a holiday. I mentioned to him how we were told if we could get a nebulizer we could go home. “That’s impossible today.” I told him that all I knew is we were told they were working on it.

While he is explaining to me just how impossible it is to get a nebulizer today a guy walks in the door carrying a box and asks, “Are ya’ll the Bailey’s needing a nebulizer?”

I really wish I had a picture of Alfred’s face when that guy walks in with our nebulizer.  It was absolutely priceless!!

Turns out that there were a few deliveries that just happen to cancel at the last minute so he was able to bring us a nebulizer.  Even he acted like it was pretty amazing how it all worked out.

So at 5:00 we were told it would be several more hours until we got our nebulizer and by 6:00 we were checking out of the hospital!

We give God all the glory for orchestrating our day in such an amazing way.  While the nurse was helping me gather our things together to leave she mentions how neat it is how it all worked out. “I guess the Lord didn’t want you staying here tonight.” she said.

“No he didn’t!  He is so amazing and faithful & I an always surprised at how he works.” I replied.

Thank you Lord for giving us such a wonderful start to a new year.  You started 2013 reminding me that you are completely in control and in love with us. I can’t ask for a better start!