ADHD is not a Disorder 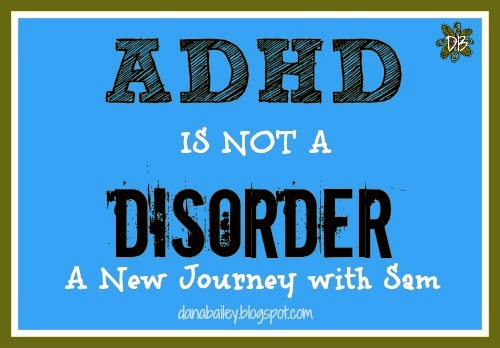 We are on a new journey with our son Sam. He is our #10 kid in the sibling line up and is 7 years old.

Sam is sweet, sensitive, funny, creative and just all around wonderful.  When Sam was a toddler we noticed when he played with his brothers hot wheel cars he lined them up perfectly and sorted them according to color or size.  Strange for a toddler to do this, but we just chalked it up to being a little OCD, plus we thought it was cute.

When I would bathe Sam and rinse his hair, he screamed.  Every. single. time.  From the time he was a baby if I poured water over his head, he screamed.

Sam has always hated clothes.  He insisted all tags be cut out of his shirts. I hated doing this.  But I needed him to wear clothes so I did it. Same with his socks. He often would wear his shoes without socks because they bothered his feet.

School was a disaster for him last year.  He was supposed to be in Kindergarden. We barely got anything done.  It was obvious to me he wasn't ready & since he is the 6th boy I have homeschooled I knew that often my boys are just not ready until 1st grade to structured academics so I stopped pushing it.  When we started this year it wasn't any better, in fact it was much worse.  Tantrums are not something Sam has ever done, but he was doing them very well now.  Running away from me when he couldn't remember how to say his phonic sounds. Banging his head on the table or hiding under the table became an everyday thing. Hearing him say things like, "I wish I was dead." or  "I don't want to be here anymore" broke my heart.

I made an appointment with a special doctor at our Pediatricians office for an evaluation.  She was wonderful and spent a lot of time with Sam asking him questions.  She had me fill out a questionaire.  Once it was all said and done she agrees with me.  Sam is ADHD and has Sensory Processing Disorder.  She wanted to send Sam for a more detailed eval but we haven't had the money so we have taken what she said and tried to come up with a plan.

This so called diagnosis isn't really life changing for us.  Josh was ADHD & Dyslexic.  Ashley was ADD & Dyslexic.  But it is the sensory issues that have brought more disruption than anything else.  It is another new normal for us.  It is a new mindset towards his behavior. His "episodes" are not always because of rebellious behavior.  He isn't just picky. He isn't trying to be difficult.  There is more to it than that & I am glad we finally know what it is.

What I thought were cute little querks about Sam are more complex.

He is old enough now to put words & explanation to these querks and I am getting a glimpse into this sweet little boys distorted mind.  He is full of anxiety & fear.  He is afraid of the unknown...who isn't?  But his mind tries to convince him of things that are completely untrue.

When I would pour water over his head in the bathtub he thought I would drown him.  When I asked him about it he said, "I know you would never do that, but when you pour water on my head I think I will drown and that scares me."

He is super sensitive to touch.  No tags in the shirts.  Socks are often wore inside out because they bother his feet. He hates the way his hands feel when he runs water over them to wash his hands. He hates sudden loud noises. He doesn't like for people to touch him, but he will touch anybody, anytime he wants. He won't eat if he thinks someone else has touched his food or if his food will make his hands dirty.

When Sam was a baby, I could put him in a baby wrap & wear him.  He loved it. Even if he wasn't sleepy, if I put him in it, he would immediately calm down and go to sleep.  Now, when he is upset or acting out all I have to do is come up behind him, wrap my arms around him and hold him tight and he calms down.

The first thing we did was change his diet.  Taking high fructose corn syrup and dyes out of his diet made an immediate difference.  He is sugar sensitive which means when he has sugar or other sweetners other than Agave syrup or Stevia he becomes hyper and sometimes aggressive.  He says, "Sugar makes me crazy".  I am looking more deeply into the Feingold diet to see if this is something we can do that will help him even more.

Next we are using essential oils to help him calm down and focus.  They are working & we love the results.  Through Young Living we are able to get oil blends that were formulated specifically for hyperactive kids.  When he is overwhelmed or feeling very down (which often leads to agressive behaviour if left alone) I can have him inhale an essential oil and it helps him a great deal. More about this later.

Next, we never ever tell Sam there is something wrong with him or that he has a disorder. Because he doesn't. I know other's may disagree with me here, but Sam does not have a disorder. He is ADHD & has sensory processing issues, but I do not see those as disorders.  He has an opportunity to learn how to do things differently & handle life circumstances differently than someone who isn't has not been diagnosed.

We praise him when he does really well, we discuss everything about his day that went well, we discipline when we need to and do not let sinful behavior go. We treat Sam no different than we normally would, except that now we know there is something driving him besides just being a typically little boy.  We know that often he acts out and doesn't understand why he did it.

One day when Sam & Gracie went to the store with me there were some boys who were looking at Sam and whispering.  Sam thought those boys were talking about him and got very upsetto the point of crying.  Every isle we went on he was afraid of those boys being there, no matter what I said.  As we were walking out of the store he says to me, "Mom, I don't understand why I did that.  I know those boys wouldn't hurt me.  Why did I cry?  I couldn't stop crying." That made me very sad for Sam.

Some days are good.  Some days are bad. Some days we just take it one minute at a time.  We already live like that so it's all good.  Sam is still my sweet lovable, huggable little boy who loves to climb up in my lap and kiss my face.  I'm thankful for the challenges because they are preparing us for more challenges.  I'm thankful for the good days because they are good.
at Tuesday, February 18, 2014