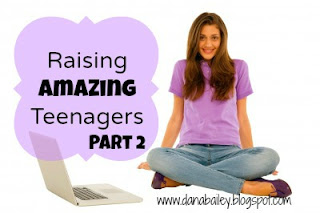 Raising teenagers doesn't have to be a nightmare.  I think we can avoid much of the drama usually involved with teenagers if we will follow Biblical standards starting when they are young, instead of waiting until they are older.


We taught our kids the importance of simply being kind to each other.

“A man who is kind benefits himself, but a cruel man hurts himself.” Proverbs 11:17


Siblings are going to argue, fight, bicker…whatever you want to call it.  But I can’t stand it.  Instead we tried to teach our kids to honor one another.  This was simply putting others before yourself; doing something nice for them, just because you want to.  This eventually became the key to them being kind to each other.  I still hear the bickering sometimes, but I also see and hear a lot of kindness.

My teenagers are nice to each other.  I didn’t know that was possible!  It is a blessing to me & others when I see my big kids doing nice things for each other.

Collin is 17 and just started his last year of High School.  He has taught himself a great deal about auto mechanics.  When he was younger, my husband taught him the basics and that sparked an interest that Collin has taken to a higher level.  So, it is to our great advantage when one of our cars has a problem, we know Collin will figure it out.  His sisters bring their cars to him and often he has stayed up late at night, or spent long hours under the hood on his days off to make sure the car is fixed right.  He learned when he was young the importance of taking care of your family first and you know that makes this momma proud when he does that!

We taught them the importance of hard work.

“Whoever works his land will have plenty of bread, but he who follows worthless pursuits lacks sense.” Proverbs 12:11


Our kids have always had chores to do.  They are part of our family and they live in our house, therefore they will help keep the house.  It is not just mom’s job or dad’s job.  Everybody has to help.  This accomplished many things.

It gave them responsibilities.
It gave them ownership of our home.
It taught them the value of hard work and the rewards.

When they chores were complete correctly they were then free to play.  When my husband managed rental properties and someone would move out, the house would need to be cleaned really well and often repainted & minor repairs made.  We all helped him do this.  The girls and I would go through and clean and the boys would help dad make the repairs and everyone would paint.  We didn’t know how much this was teaching our kids until they were old enough to have their own jobs.  Helping dad was not an option.  Work was never an option.  Now my 5 older kids all work for other people and are respected and admired for their hard work ethic.

Also, once our kids turned 13 we bought them a cell phone but they had to start earning money somehow to pay for the service.  The girls would babysit or be a “mommy’s helper”. Often the boys would mow yards for people in our neighborhood.   If our kids wanted name brand clothes that we wouldn’t buy, they knew they needed to save their money to buy it.

If they wanted their driver’s license they needed to be able to pay for the insurance and gas.  Once they had their license they saved their money to buy their first car.  Yes, we did not buy them a car.  I think it would be a lot of fun to buy my kids the kind of car they want, but when our kids had to work for it and pay for it their selves they developed an attitude of ownership they wouldn’t have had if we just gave it to them.  Plus, my kids love to tell their friends, “Yep, I bought it with my money & it’s all mine, no payments!” So, our driveway does look like a used car lot with 5 extra cars parked in it, but I am so proud of my kids for their hard work & determination.

There is a generation of young adults now who have an unbelievable attitude of entitlement.  They believe they deserve to get whatever they want and they want it now!  We really wanted to combat that as best we could and teaching our kids to work for what they want has helped a lot.  We didn’t give them whatever they wanted growing up, they had to earn most of what they received.

The next post will cover qualities vital to becoming a responsible adult.  We want our kids to eventually leave our home and to be known by their peers as trustworthy, hardworking adults who love the Lord.  Stay tuned!