No Babies in the House 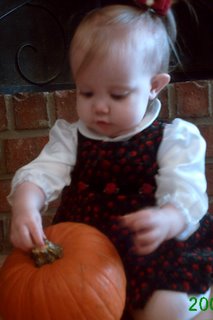 Today is Gracie's first birthday. You would think that after doing this 8 times before it wouldn't effect me, but I feel a bit of sadness at the fact they she won't be called a baby anymore.

How quickly time passes. It seems like yesterday that I was sitting here at the computer with Gracie on the boppy nursing in my lap while I checked email. Now she is taking steps and waving bye-bye & showing her precious personality. What a joy she is to all of us.

It is so hard for friends and family to understand why Scott & I have chosen to have such a large family. To be honest we never dreamed it would be SO large, but how blessed we feel. We know that we are not "normal" according to societies standards but people don't seem to understand that we are not aiming for approval from society. We are only seeking approval from our Lord Jesus. He is who we are accountable to, not the world. The comments we hear are still hard to listen to at times, but there are so many who are actually persecuted in the name of Christ that the comments we receive are nothing more than flicks on the soul.

We know that God's purpose for the church is so huge that we cannot even comprehend. And we are only but a small speck in that purpose. And what an honor for God to allow us to raise 9 (so far) of his future leaders. What an amazing ministry Scott & I have as we train and nurture our children in the admonition of the Lord.

So each new baby we are given is a true blessing and gift from the Lord. And as each one celebrates a birthday we celebrate the abundant life that God gives us each day.

There once was a woman who lived near the ocean. She could see it from her front deck and loved to watch the waves come in and hit the rock cliff. She was a good woman and she did many great things. She was very successful at most anything she did. Her father told her many times growing up, "You can do anything that you want to do if you only try hard enough." She remembered that advice as she grew up and started a career.

One day as she watched the waves rolling in she thought, "I can do anything, even become stronger than the waves, so she decided to try. She climbs down the rock cliff and walked out from behind the rocks and stood there on the beach at the waters edge. The tide began to roll in and the water became deeper & deeper and the waves became stronger & stronger. She noticed that the sand under her feet began to wash away and it was harder & harder to keep her balance. She knew this was not going to be easy, but she remembered her father’s words that she could do anything if she tried hard enough. The water was at her waist now and it was getting harder & harder to stand. She used her arms in the water to help her keep her balance, but she was getting very tired from the constant force of the water. It was now up to her neck and she had lost her footing. The sand was gone and she was being tossed about in the waves. The water pushed her out & then it pulled her in. It took her under & then it pushed her back up. She knew that she was not stronger than the waves & that she needed help. She managed to get her head above the water and look up towards the shore. It was very far away & she would never be able to get back to it on her own. She still struggled with the waves wondering where she went wrong. She thought that maybe she could swim pass the waves where the water was calm. So, she began to swim as hard as she could against the waves but she was too weak and the waves were too strong. She knew that she had to get back to the safety of the rock cliff. She tried to swim and fight her way towards the shore but the tide only took her farther and farther away. She finally whispered the words,” Help me!". She suddenly looked up and there he was. He picked her up out of the water and carried her up the cliff. He took her to the cleft in the rock cliff and set her bloody & bruised body down. She was so exhausted she didn't even realize who he was. He gave her food and water and covered her with dry blankets. He let her sleep and after she had rested and feeling better she sat up and saw him sitting by her bed. She now knew who he was. She had heard of him, many times when she was young, from her mother. She now felt very embarrassed and mostly foolish about what had happened.

"My daughter," He said,” Why did you try to fight the waves by yourself? Did you not know the strength of these waves can be very great?"
Feeling very foolish she replied “I thought that if I tried hard enough, that I could become stronger than the waves, but the sand washed out from under my feet and I lost my footing. Then I thought I could withstand their force and swim through the waves to the calm water on the other side. But, I was too weak."
"Come here, let me show you." He took her to the edge of the cliff. She stood behind Him as the waves began to hit the rocks on the edge. She could feel the water even from behind Him, but this time she was not knocked down. She felt this time that she was protected and safe. The water hit him with such a great force but he did not even blink or move. The waves continued to roll in and she could still stand because she was behind the Rock.

"I see now," she said to him, "I am strong, but only when I admit that I am too weak on my own. It's the strength of the rock that keeps me safe from the waves."
If you stand in front of the rock and go back to the sand your strength will not last and the waves will over take you again. Take refuge my child, for I am your rock, your fortress and your deliverer. Only I can save you from the waves."

"I love you, O, Lord my strength. The Lord is my rock, my fortress and my deliverer; my God is my rock, in whom I take refuge. He is my shield and the horn of my salvation, my stronghold. He reached down from on high and took hold of me; he drew me out of deep waters. He brought me out into a spacious place; he rescued me because he delighted in me. As for God, his way is perfect; the word of the Lord is flawless. He is a shield for all who take refuge in Him."
Psalms 18:1,2,16,19, &30