What do I do with this Boy?

I found this article & thought it was worth passing on. Since I have 6 boys, I understand that it does take an extra measure of creativity & patience to homeschool them. Laurie Bluedorn understands this also. 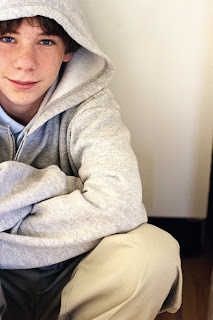 What do I do with This Boy?
by Laurie Bluedorn Copyright © 2006 Eclectic Homeschool Association

Frequently Asked Questions
Question: I have a boy who manifests several of the following behaviors:

If enrolled in a classroom school, he might be "labeled"
What do I do with this boy? I feel very frustrated

Here are a few suggestions:

Keep him away from television, movies, computer games, music that contains any kind of a syncopated beat, sugar and caffeine, and allow him only supervised contact with peers.
Make him repeat back to you what you’ve told him to do.

Work with him until you’re satisfied with his obedience. This is of the utmost importance.
Make a list of the things he needs to accomplish each day, and have him check them off as he does them. Hold him accountable daily.

Wait until age 8 or 9 before teaching him to read. Don’t start academics until age 11. (See our article on "A Suggested Course of Study" in Volume II of our magazine.) Read to him at least two hours each day. If he hates to write, allow him to dictate to you his letters and journal entries, or use a tape recorder.

Make use of the child’s one or two chief interests. Use it as an avenue to other things. (i.e., Link guns to the Second Amendment to the Constitution and to principles of sound government) Get him started in his own business that involves his interests. For example, if the child's interest is fencing you might suggest that he give fencing lessons to other children, develop a web page on fencing, write a newsletter on fencing, do a display at the library on fencing, write an introductory booklet on fencing, produce fencing equipment, do a fencing seminar for 4-H. He can become the homeschooling expert on fencing.

Give him lots of physical work to do--regular household chores and special jobs. But don’t dump it all on him at once -- he probably is the kind of person who is easily overwhelmed and frustrated. Break everything down into parts and mete them out one or two at a time. Use a chart to keep him accountable.

If possible, move to the country so you can raise animals and there will be more outside work to perform (raise rabbits, goats, or chickens, display these projects at the fair, obedience train your dog and show at fairs, raise earthworms to sell or for your garden, raise berries to sell or barter, raise some specialty animal such as a certain breed of horse, and become the local expert on that breed, have him practice carpentry skills by rebuilding a small shed or outbuilding).

Get the child involved in some kind of community service (visit the nursing home every week for one hour, cook meals for the elderly, do repair work for the elderly, pick up the trash around your neighborhood, make small wooden toys and give them to children in the hospital, make greeting cards and give them away, write letters to relatives or others).

If possible, Dad can take him to work once or twice a week.

Do unit studies instead of the traditional textbook approach to academics.

Teach him to hunt and fish.

Get him a good mountain bike so he can explore.

Keep the child on a regular schedule (flexible, but regular).

This suggestion is listed last, but is really the first: the child should be part of your daily family Bible studies led by the Father.

Sometimes, if the child persists in refusing to be interested, you must insist. The key to all this is to recognize early on that your child is one of these "late bloomers." You don't want to wake up to this fact when the child is 17 or 18 and has already developed numerous unprofitable habits and wasteful ways of thinking. Motivating a 17-year-old is much more difficult than motivating a 10-year-old. Molding a 17-year-old is much more difficult than molding a 10-year-old.
With any child, you must build a solid foundation before you begin academics. With a "late bloomer" the foundation takes longer to build and more patience must be used because the bricks tend to be less than square. But, trust me, by the mercy of God, if you persist, the structure that is built on this foundation will be worth all the blood, sweat, and prayers.

This article was reprinted from Teaching the Trivium Magazine, Trivium Pursuit PMB 168, 429 Lake Park Blvd., Muscatine, Iowa 52761 http://www.triviumpursuit.com/. The magazine is now out of print, but many additional articles and resources are available at their website.